When you think of negotiators, often famous examples such as Barack Obama or Angela Merkel spring to mind. However, at &FLUENCE we believe that successful negotiations happen in all different contexts and life situations. In this new series, we want to shine a light on more unusual negotiators, highlight their achievements and how we can apply them in our negotiations. First up: Taylor Swift!

There will be few people in the world that do not know the name Taylor Swift. She has been a constant in the music industry for over 15 years, producing countless hits and winning every prestigious music award under the sun. However, few also know Miss Swift as a successful negotiator – here are some of our learnings: 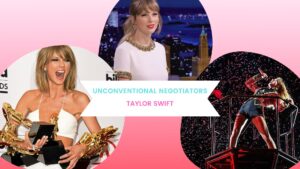 Our minds are bursting with ideas.

NOTE: These settings will only apply to the browser and device you are currently using.

In order to enhance the user experience on this website we collect anonymised user data for analytical purposes. This data will be stored in the relevant tool and is deleted after 26 months. Access to this data is limited to the owner of this website and the contracted agency [Studio Alloy] that analyses the data.For the collecting of data third party tools are used. One or more of the following tools can be used at different times.